Demographic Analysis of the COVID-19 Pandemic in New Jersey

The Covid-19 Pandemic has changed the world as we know it. For over two years, biologists, data scientists, politicians, and many others have been working to contain the virus and stop or reduce the spread. These efforts have come in the form of lockdowns, mask mandates, vaccines, extensive research, and more. Some of this research has included demographic analyses of different regions and cities to determine whether a correlation exists between virus spread and certain demographic statistics. To further study these potential relationships, I decided to perform an analysis on my home state of New Jersey, using Exploratory Data Analysis (EDA) techniques in R and using Shiny to display my findings and create an interactive app in which the user can examine these potential relationships for themselves.

To begin, I obtained New Jersey Covid-19 timeseries data on both the state and county levels from the Act Now Coalition. Data collection began on March 1, 2020 and has been updated daily ever since. When I obtained the files, they contained data up through March 1, 2022, resulting in exactly two years worth of Covid-19 data to analyze. The data sets contained more variables than I could ever have needed, ranging from test positivity ratios and case densities, to vaccination rates, to potential risk levels, and much more. In order to best answer the questions that I had sought to investigate, I narrowed it down to six Covid-19 statistics: Infection Rate, Percent Initiated Vaccination, Percent Fully Vaccinated, Percent Fully Vaccinated and Boosted, Total Cases per 1,000 People, and Total Deaths per 1,000 People.

Next I found a demographic data set from Kaggle, which contained New Jersey demographic data from the 2020 Census. Much like the previous data sets, there was more demographic information in this data set than I could use for one project, so again I had to narrow down my selection. I again chose six statistics: Percent High School Graduate, Percent of Adults 25+ with a Bachelor’s Degree, Percent with No Health Insurance, Median Household Income, Percent Living in Poverty, and Population Density.

To determine the correlation between the different demographic statistics and Covid-19 statistics, I created interactive scatterplots with the demographic statistics on the x-axis and Covid-19 statistics on the y-axis. I also had the correlation coefficient print above the graph, so that the user could see the potential relationship between the variables graphically, while also have a metric provided to them that would tell them how strong the linear relationship is. In total, there are 36 different scatterplots that the user can create between the different variables.

Out of all of the scatterplots, the strongest linear correlation was between percent of the population with a Covid booster shot vs percent of adults over 25 with a Bachelor’s Degree. From looking at the graph, it is clear to see that there is a positive linear correlation between the two variables. The Pearson correlation coefficient is 0.904, indicating a very strong positive correlation. Percent of adults with a Bachelor’s Degree was strongly correlated with percent of the population that had initiated vaccination and also with percent fully vaccinated, but the correlation becomes even stronger when it comes to the booster. Since it is most likely not the case that having a Bachelor’s Degree is what directly causes someone to get a Covid booster shot, we can infer that there are other underlying factors that lead to this correlation. 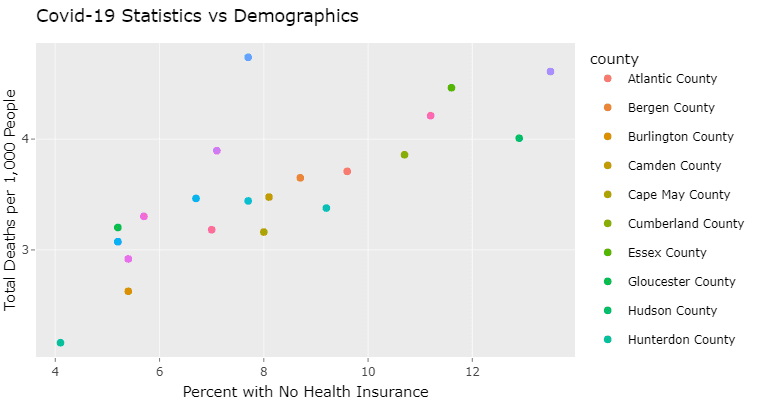 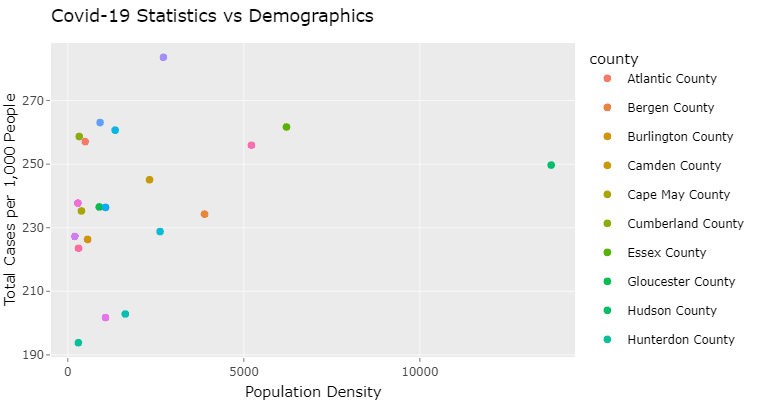 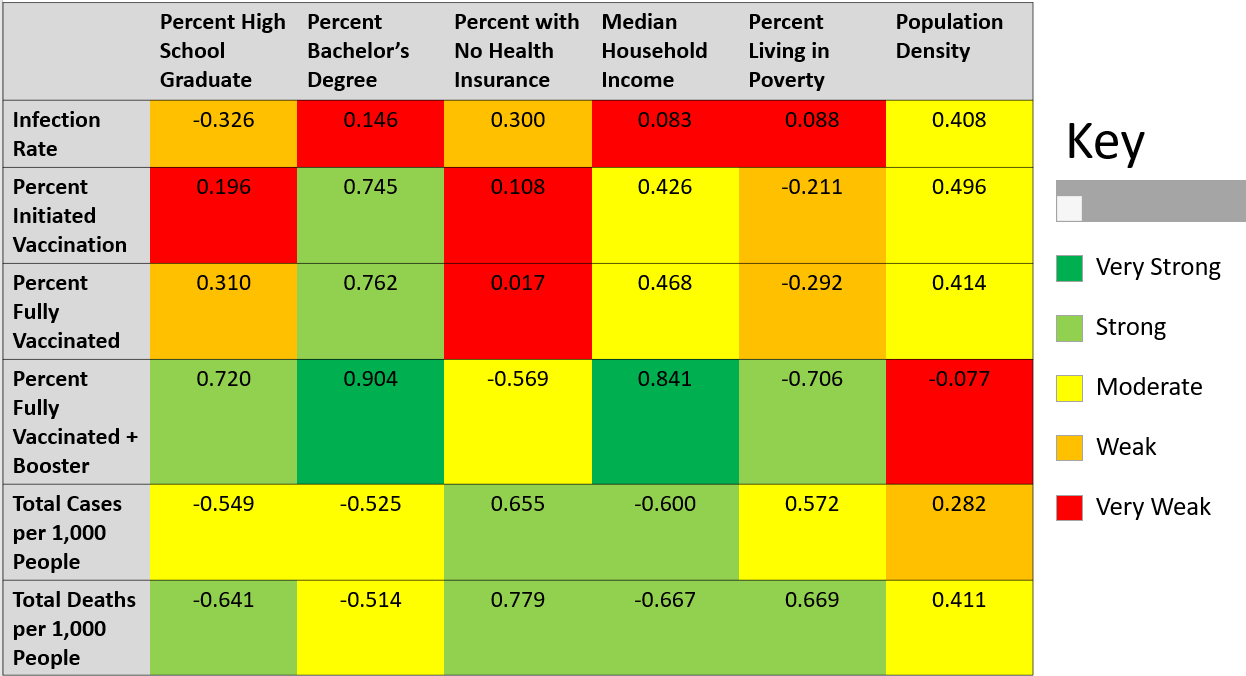 If given more time and more data, I would continue to study the connection between demographics and Covid statistics by analyzing case, death, and vaccination rates by race and political affiliation, comparing vaccination rates to case and death rates, and studying counties in other states or on the national level.